Every great city in the world has its specific dishes, and may also offer a variety of ethnic dishes brought by the various ethnic groups established there. This is by far the case of London – this is the city where you can have a hearty English breakfast and just around the corner find one of the most delicious shawarmas. No travel experience is complete without food – first of all, because food is a vital part of life, and secondly, because knowing new places also involve knowing their food. Food is culture, and London has a very rich gastronomic culture, even if it may not be as famous as the French or Italian one. Let’s see what traditional foods you need to try in London:

If you enjoy a copious meal in the morning, you need to try this infamous breakfast, which includes the following items in its full version: fried egg, sausage, white and black pudding, bacon, mushrooms, baked beans, hash browns, toast, and half a tomato. Some would say this is enough food for an entire week, but this was the best choice for people who could eat in the morning but have no idea when they will have food available again throughout a day of hard work. Maybe it’s not the type of breakfast you’d want to have every day, but it may be a good idea to give it a try before a day of continuous sightseeing. 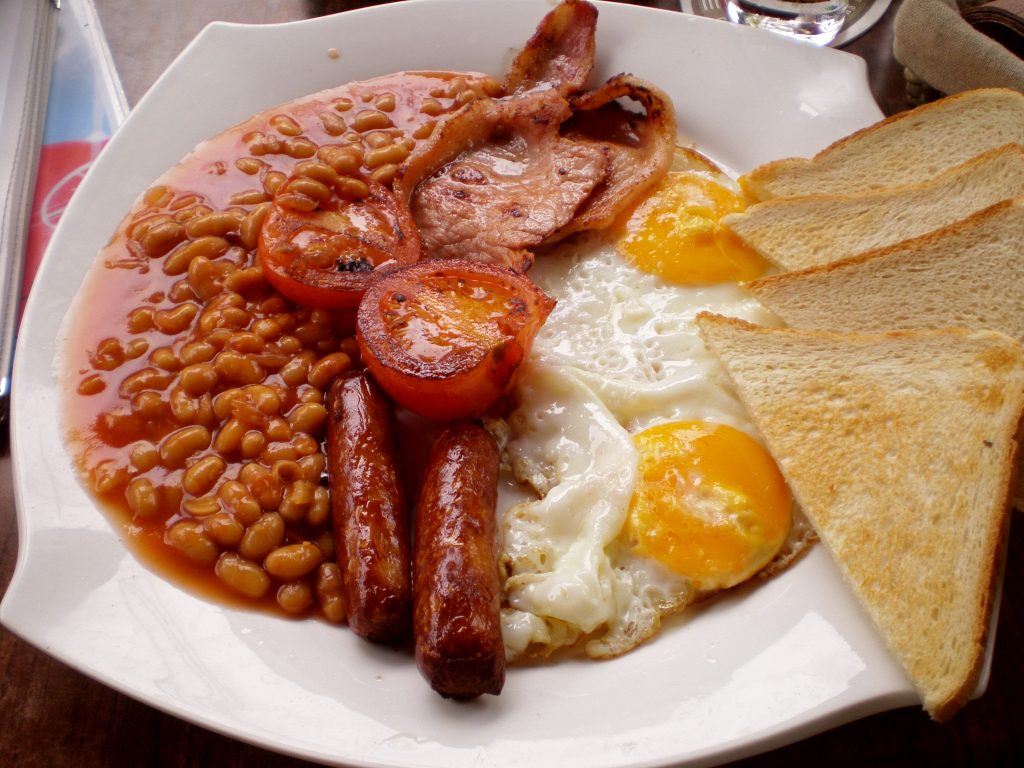 Another iconic dish of Britain, fish and chips appeared in the 1860s and consists of fried battered fish and hot potato chips. It is a takeaway food traditionally using beef dripping or lard for frying, with vegetable oils being preferred nowadays. This food has spread throughout English-speaking countries, including Canada, The United States, Australia, New Zealand, and South Africa and is sold by fish and chip shops. An interesting fact about this food: in the UK, waste oils from fish and chips shops is used as a source of biodiesel – a measure with a significant impact considering that fish and chip restaurants sell a quarter of the white fish consumed in the kingdom and 10% of all potatoes. 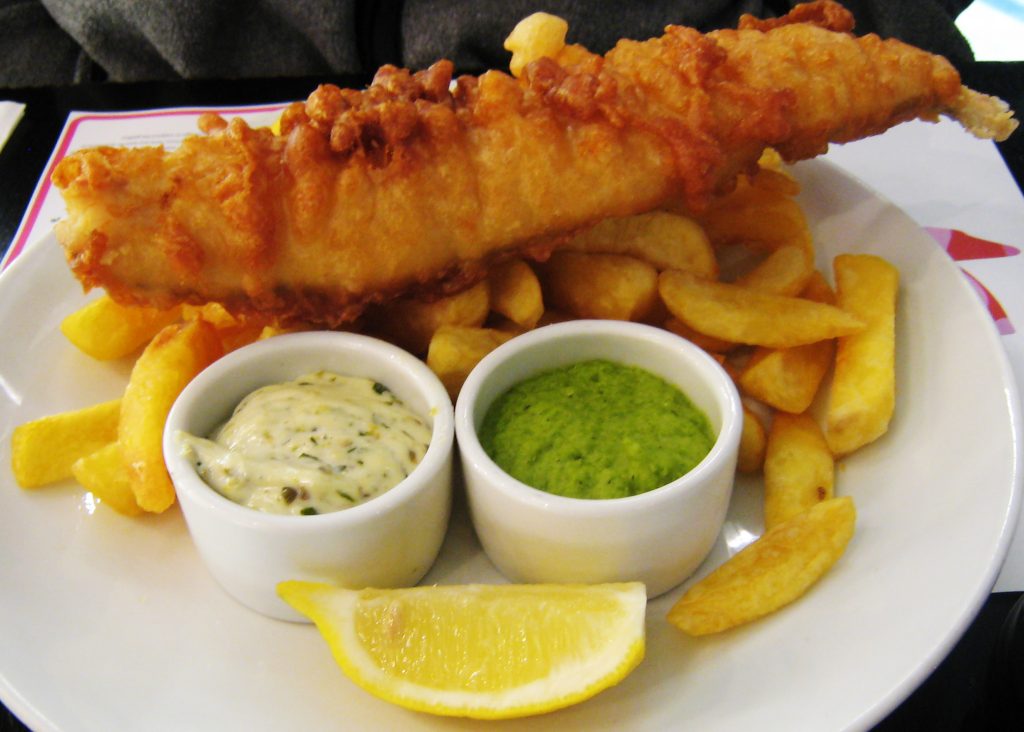 This is a main meal typically served on Sunday – as its name suggests – and consisting of roasted meat, roast potato, and accompaniments such as sausages, stuffing, vegetables, gravy, and Yorkshire pudding. In a UK poll, Sunday roast ranked second in a list of things people love about Britain. The meats used for the Sunday roast include beef, pork, chicken, turkey, and lamb – it is a versatile dish suiting a variety of tastes. The important thing when it comes to an original Sunday roast is having the Yorkshire pudding on your table – this is a food made from batter consisting of eggs, flour, and milk or water. 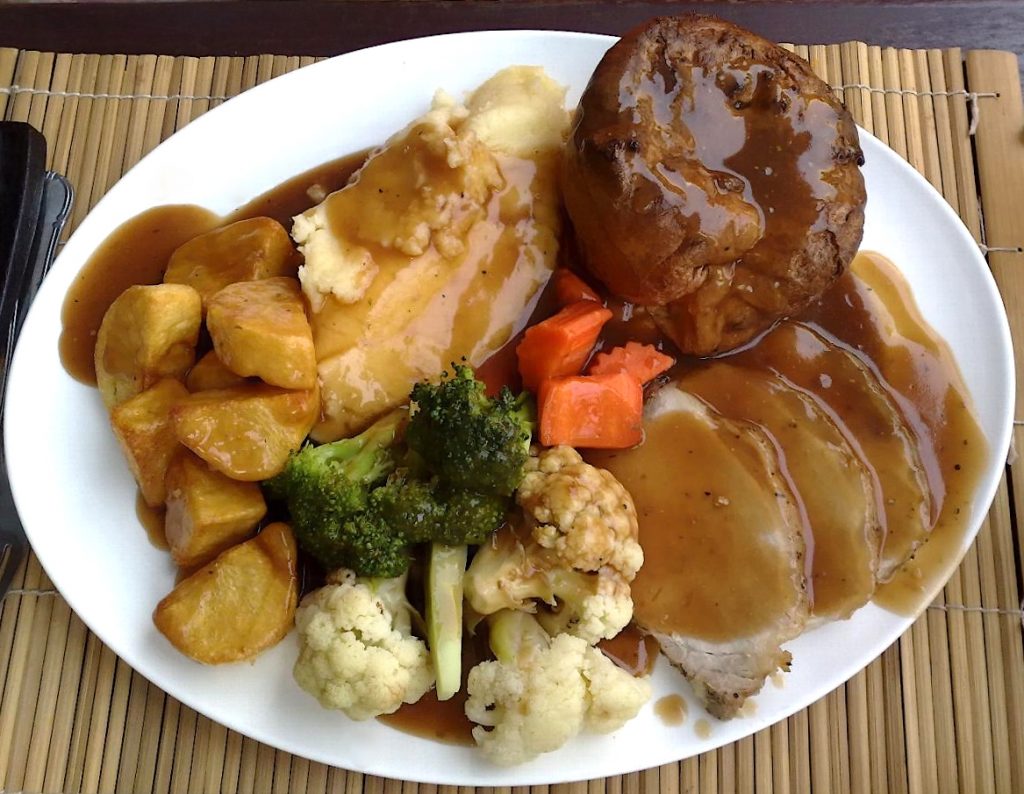 This food has originated in London, which makes it even more a must-try when visiting the capital of the UK. It is traditionally a food of the working class, developed in the 19th century. It consists of minced beef and cold water pastry pie served with mashed potato. Oftentimes, parsley sauce is added to the dish, and it is commonly called eel liquor sauce or liquor (although it doesn’t contain any alcohol). It is one of the most affordable meals in London, perfect at the end of your visit, when you may have little money left in your pocket! 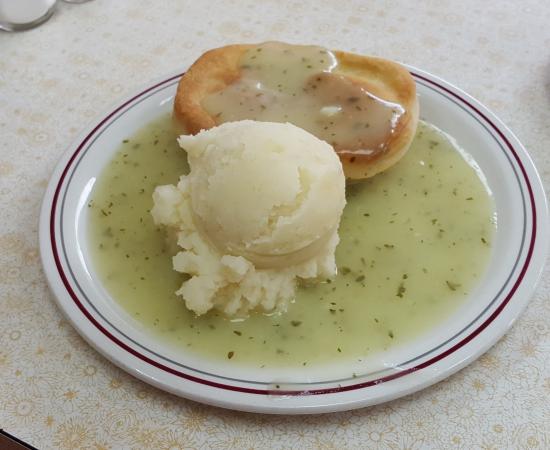 You can’t have a meal in the city of London without trying a typical English desert, and one of the most unpretentious ones is Eton mess. It is an English dessert consisting of strawberries, broken meringue, and whipped heavy cream. Its name suggests it has originated at the famous Eton College and its first mention in print dates from 1893. Meringue was added to the dessert later, but what hasn’t changed is the messy aspect of the dessert. There are variants with different fruits available, but the classic strawberry version is the favorite of most locals and tourists alike. 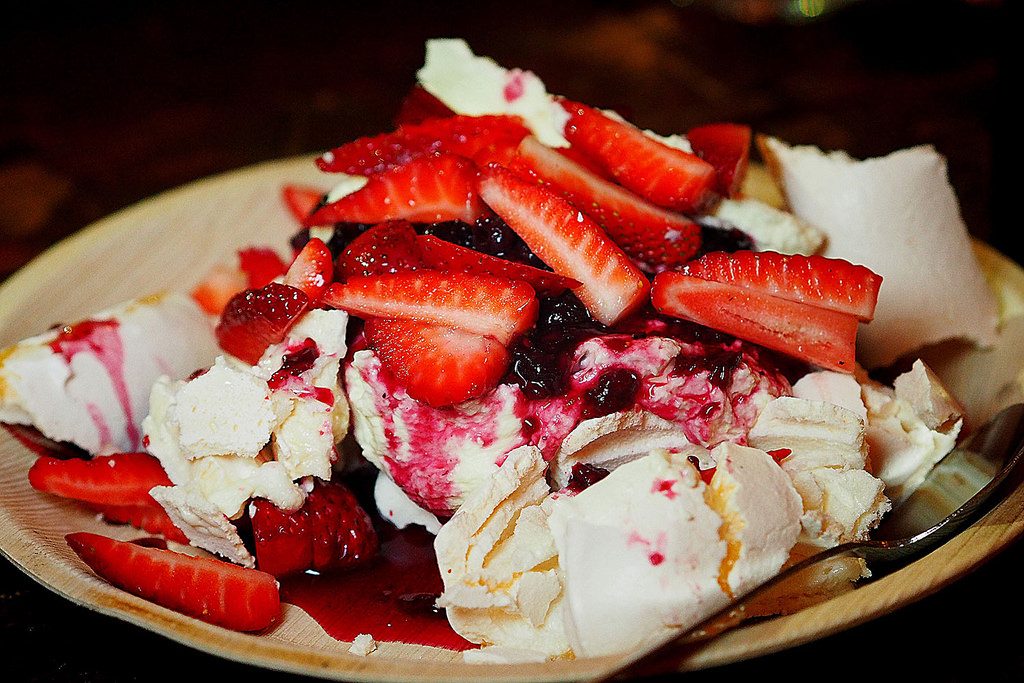 Cockles are a type of small clams, traditionally consumed in London’s East End. They are available in grocery stores, markets, and also ready-made on take-away restaurants. They have been a staple food for decades and definitely a must-try in a country surrounded by water from all parts. Cockles have the advantage of being affordable and authentic at the same time, so give them a try as well! Back to desserts, and now to one loaded with calories. It is one of the modern British classics and it consists of very moist sponge cake, enriched with finely chopped dates, and covered in a toffee sauce. Some recipes suggest serving the sticky toffee pudding with vanilla custard or vanilla ice-cream. The dessert was developed in the 1970s by Francis Coulson and Robert Lee, at the Sharrow Bay Country House Hotel in the Lake District. As its name suggests, the dessert sticks to your mouth and teeth, so make sure you wash your teeth carefully after enjoying this delicious treat! 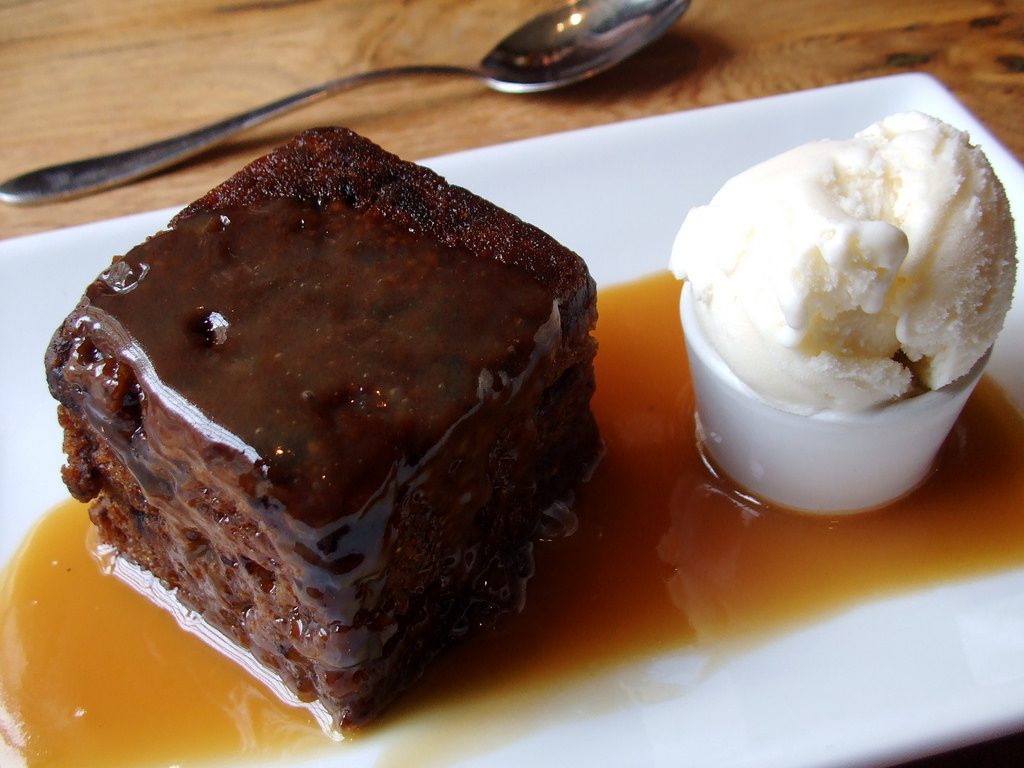 One of the most famous British traditions is the afternoon tea, served between 3:30 PM and 5 PM. It is a custom originating among the wealthy social classes in England in the 1840s, and the habit of having a light meal accompanied by tea in the afternoon has been copied in England and elsewhere throughout the world. Foods served with the afternoon tea include egg and cress sandwiches, cucumber sandwiches, bread and butter, scones, cakes, and pastries. Finger sandwiches are preferred, with the bread crust removed. Nowadays, afternoon teas are usually served at special occasions or as a treat in hotels. A glass of champagne can be added to the afternoon tea, for more festive occasions. 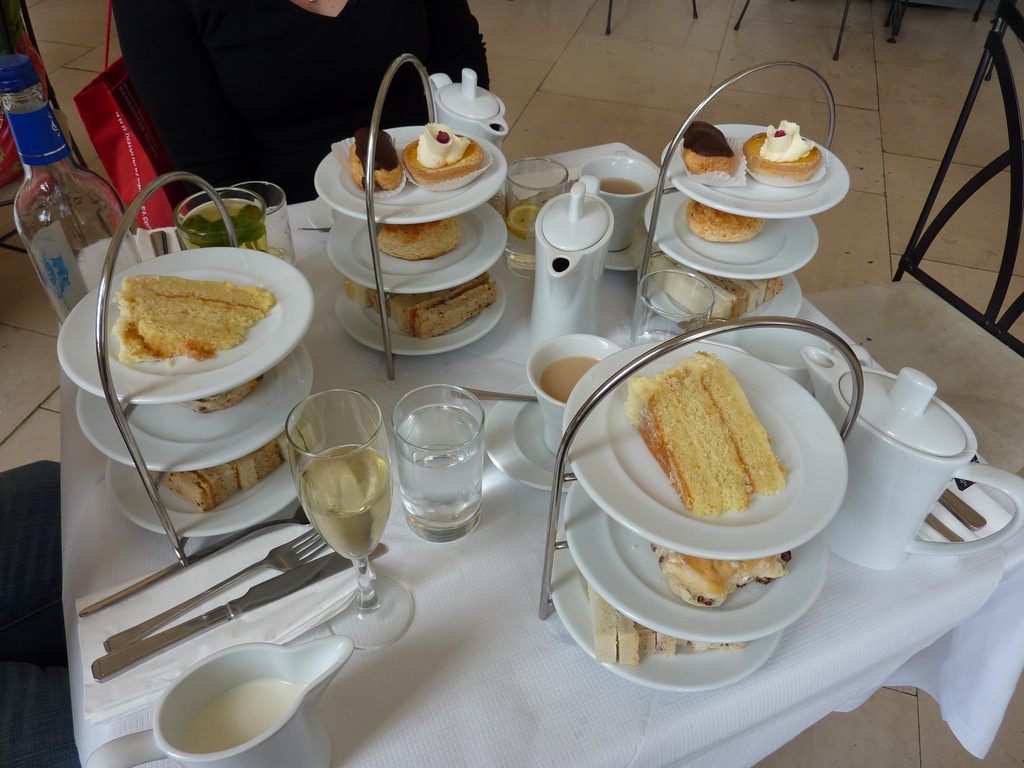 We are sure that a culinary adventure throughout London will place this famous city on your gastronomic map of the world and make you appreciate British cuisine for what it is – simple and nourishing food that will give you the energy needed for that long walk on the banks of The River Thames!