How To
/
Architecture
/
Famous bridges across the River Thames

London would not be the same without the river crossing its heart – actually, the Romans built the city strategically on the banks of the River Thames, 2000 years ago, and chose for London a position that made it easy to reach any point in Europe. Nowadays, the River Thames attracts a large part of the tourists visiting London and also provides drinking water to the capital and other areas in England. With its waters varying from freshwater to almost seawater, the Thames is also home to a variety of wildlife and has multiple adjoining Sites of Special Scientific Interest.

The first bridge in London was built even before the city was established; seven years before London was born, in 43 CE, Romans invaded England and chose a place that was narrow enough to bridge, thus building the first crossing over Thames in the area of London.

Nowadays there are 33 bridges across the tidal Thames from Teddington Lock to the open sea in the area of Greater London. Here are some of the most important:

Probably the most famous and easy to recognize bridge across the River Thames, this masterpiece of architecture was built between 1886 and 1894. It is a combined bascule and suspension bridge and it has become an iconic symbol of London. The bridge is accessible to both pedestrians and vehicles, and the bridge’s twin towers are part of the Tower Bridge exhibition, for which and admission charge is required. The total length of the bridge is 244 meters, and its height reaches 65 meters. Tower Bridge delimitates two London boroughs, Tower Hamlets on the north side, and Southwark on the south side. 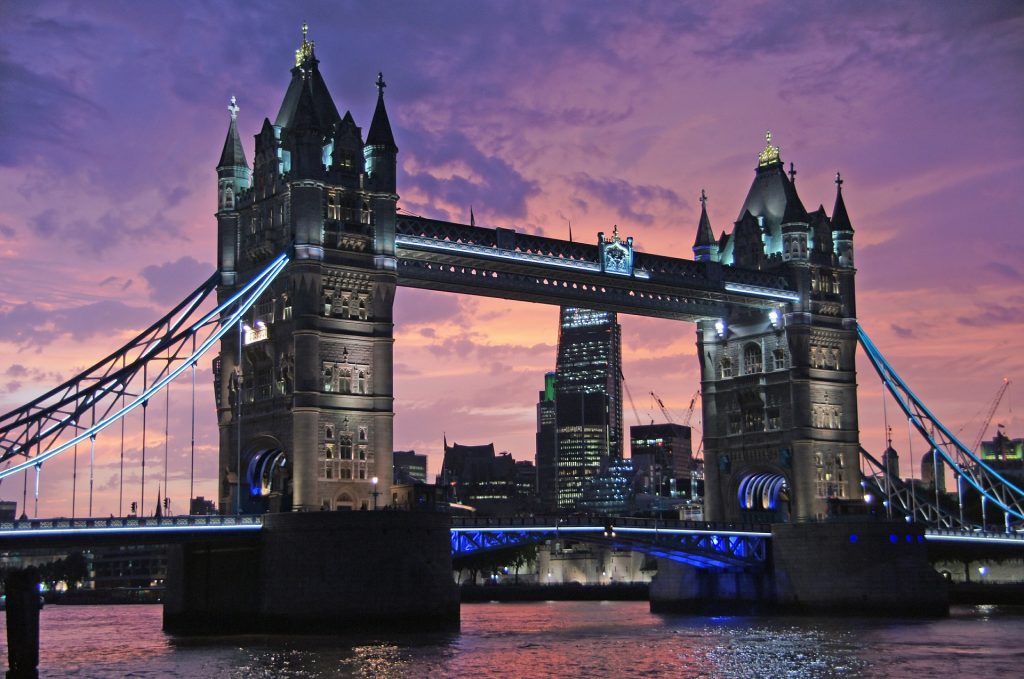 Throughout history, multiple bridges across the River Thames have been called London Bridge. The current bridge opened to traffic in 1973 and is located at the western end of the Pool of London, 30 meters upstream from previous alignments. Its predecessor dated from the 19th century, and it was a stone-arched bridge, replacing on its turn a 600-year old medieval structure. Before that multiple timber bridges had been called London Bridge starting with the one built by the Roman founders of London. The importance of this bridge in London history and popular culture can be determined from the famous nursery rhyme “London Bridge is falling down” and its numerous mentions in art and literature. The current London Bridge is a prestressed concrete box girder bridge with a total length of 269 meters and a width of 32 meters, opened on March 17, 1973.

Fun fact: London Bridge has been illuminated in red since Remembrance Day 2004, when several bridges in London were furnished with red lighting. London Bridge was the only one not stripped of the illuminations ever since.

A steel suspension bridge for pedestrians, Millennium Bridge links Bankside with the City of London and was originally open in 2000. On the first day of operation, pedestrians felt an unexpected swaying motion, which made Londoners nickname the bridge the “Wobbly Bridge”.  The vibration as attributed to a phenomenon whereby pedestrians crossing a bridge with a lateral sway tend to unconsciously match their footsteps to the sway, thus accentuating it. After two years of limited access and modifications, the motion was eliminated and the bridge was reopened in 2002, remaining fully functional and popular among tourists and locals. The bridge has a total length of 325 meters and a width of just 4 meters. 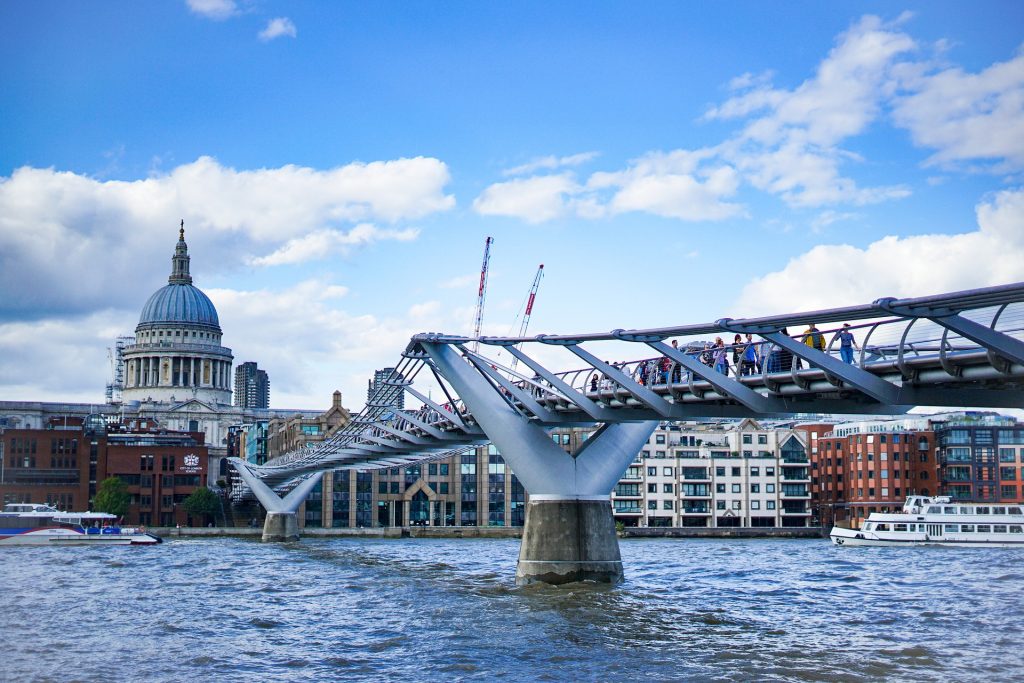 This is a road and foot traffic bridge, whose north end is near the Inns of Court and Temple Church, and whose south end is near the Tate Modern art gallery and Oxo Tower. The first bridge to be called Blackfriars opened in 1769, and the current one dates from October 1869, with a total length of 281 meters and a width of 32 meters. The original Blackfriars Bridge was demolished in 1860 because of its very poor workmanship, which required expensive repairs. The present bridge was opened by Queen Victoria and consists of five wrought iron arches, designed by Joseph Cubitt.

Fun fact: The Bridge became notorious in 1982 after Roberto Calvi, a former chairman of Italy’s largest private bank was found hanging from one of the bridge’s arches – forensic experts concluded 20 years later that he had been murdered by the Mafia, to whom he was indebted. 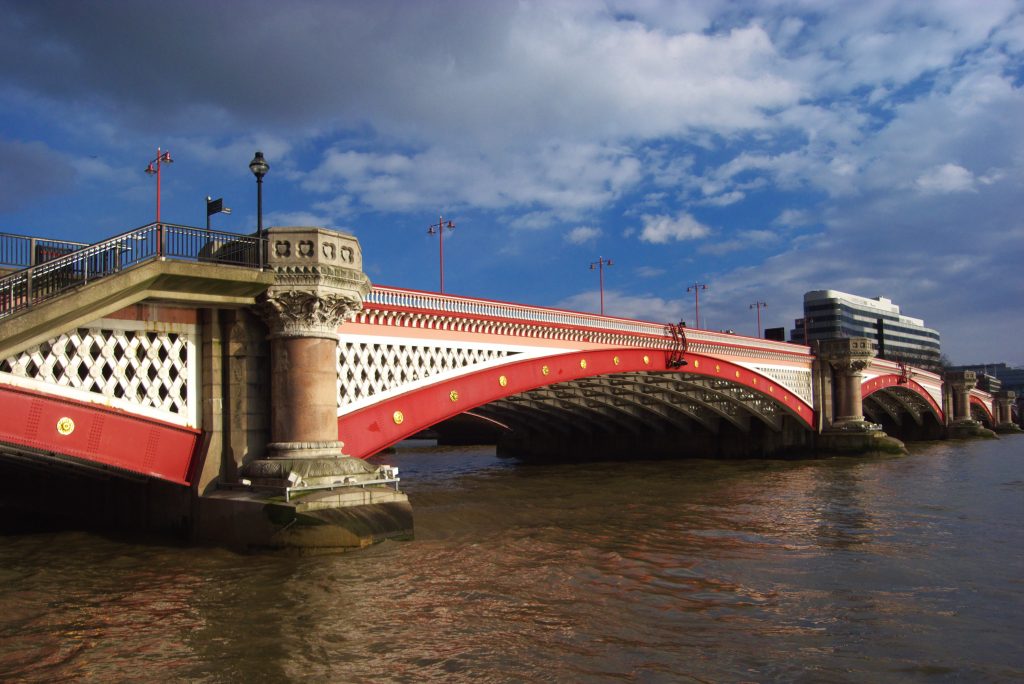 Albert Bridge connects Chelsea on the north bank to Battersea on the south bank. With a total length of 220 meters, it was originally designed and built by Rowland Mason Ordish in 1873, as a modified cable-stayed bridge, a system which proved to be structurally unsound. Between 1884 and 1887, design elements of a suspension bridge were incorporated, and in 1973, two concrete piers were added – as a result, today the bridge is an unusual hybrid of three different design styles. It is one of the least used bridges on the River Thames, because of its continuous degradation issues, affecting the structure and the timber deck. In February 2010, it was closed for refurbishment and strengthening. The initial plans were to close it for 18 months, but the bridge was found to be worse than expected and it was closed for 22 months. It reopened on December 2011, when two dogs called Prince and Albert walked across the bridge to officially open it.

Fun fact: In 1992, the Albert Bridge was painted in an unusual color scheme to make it more conspicuous in poor visibility, to avoid being damaged by ships. At night, the bridge is illuminated by 4,000 LEDs, making it one of the most striking landmarks in the area.

Which of these structures impress you the most? Which have you visited and what did you like the most about them? Share your opinion with us!